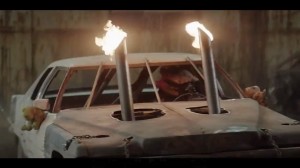 McGuiness’ souped up Merecedes M Class made it through the 2013 Conflict Resolution Derby – resolving the issue of “cow polution” – relatively unscathed.

“There’s nothing like 3,000lbs of steel to drive your political point home and resolve a conflict,” Mayor Dave Anderson said about the event that also funds Coma High School’s drivers’ education program. “Of course, we’re under court orders to say ‘This is not an endorsement of aggressive driving. Blah, blah, blah.'”
The outcome, which came to this reporter in a peyote-fueled fever dream, surprised McGuiness the most.
“I’m a horrible driver and I only agreed to participate again because I was told hot chicks were involved,” McGuiness said. “But that seems largely untrue for the other teams except for Sadie Cracker.”

“Not sure how I got involved in this,” said Sadie Cracker, in an over the phone interview with children screaming in the background.
McGuiness’ team, the Meatlover Mashers, narrowly defeated the Vegg-a-girls to settle an increasingly acrimonious political debate that has gripped the town in recent months.
One of the leaders of the Vegg-a-girls, Town Councilwoman Natalie Peters, narrowly missed eliminating McGuiness with a nasty T-bone impact while screaming “It’s time to evolve!”
“I just hope I do well enough to honor the memory of my deceased parakeet,” Peters said. “Between the two of us, he was the real fan of demolition derby.”

McGuiness was able to win largely because of his strategy of alternately pretending his vehicle was already disabled and hiding new the edge of the arena.
“Sounds about right,” McGuiness said.