The recent tragic death of Mr. T will not be in vain, his former owner has vowed.

Mr. T, also known as Mr. Tweet-Tweet-Tweetybird, was the parakeet of Councilwoman Natalie Peters. The bird was caught and eaten on April 1 by red-tailed hawk while flying outside his cage–an item on the pet bird’s bucket list.

“Mr. Tweet- Tweet died like he lived: Flying away from me,” said Peters, in a heart-felt speech at Wednesday’s City Council meeting. “It’s time to stop the unnecessary bird-on-bird violence.”
Peters proposed an ordinance to confer “all rights and responsibilities enjoyed by Coma residents” on any non-raptor pet birds living in the town.
Peters said her campaign for public support of parakeet personhood will entail her finishing Mr. T’s bucket list for him.
“I promised him skydiving and that he could go to a strip club before he passed on,” she said. 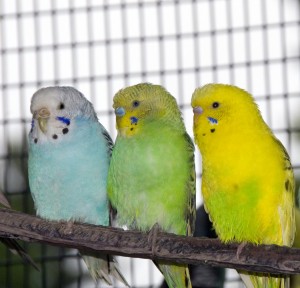 This year Peters has lost three birds to her parakeet “bucket list effort’. Butch and Sundance (pictured on the left) were killed by a rogue tabby cat prior to eating their “final steak dinner”.

The parakeets’ rights push elicited strong opposition from some residents.
Robert McGuiness, a former reporter for Coma News Daily, said during happy hour at  Bear’s Beer Barn that he understands that “not everybody’s into bird-on-bird action,” but personhood is unwarranted.
“A parakeet lives in a cage, it tweets, It has feathers.” McGuiness said. “This pea-brained bird–his brain is literally that size–had no idea about bucket lists or any other movie cliche.”
Instead, McGuiness urged a “personhood awareness” movement where humans “realize what we have and what an amazing life we get to live every day.”
“Maybe we should start there before conferring rights on every bloody thing that moves,” McGuiness said. “Maybe this happy hour is making me too sentimental.”
Peters’ first of a series of planned skydives into area strip clubs is scheduled for Friday.