May. 04 News, Podcast no comments

It’s 32 degrees in Coma and your aunt is passed out beside the Christmas Tree.

This is Coma News Daily.
The complete internet news source portal for the Town of Coma.
This episode of Coma News Daily is brought to you by Kale flavored liquid ham. It’s the kale flavor that makes it so delicious.

This week we wrap up serious and find that none of the questions that needed to be answered got answered. We also prebreak the news of next year through one reporters peyote fueled fever dream. We find that Panera cork board can help you find someone and that soap made out of doves doesn’t wash away a broken heart.

Rate & Review on iTunes
Share with friends and family

As always you can hear the podcast by clicking play at the bottom of this blog post! 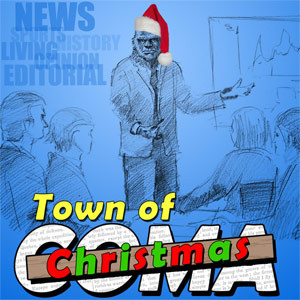 Mystery Solved: Nothing Depends on a Red Wheelbarrow

May. 04 Living no comments

Editor’s note: As part of Coma News’ community outreach, the following blog excerpt is one of a selection of local online postings we will re-publish by residents and business owners.

Daddy Warbucks: “Marybell have you made any money yet?”
Me: “No way Daddy but I solved another Internet mystery and this one is not about an ex-boyfriend. It’s about poetry”
Daddy Warbucks: “College degree! $200,000! Marybell! Blah blah!”

So I went to this poetry reading. BOR-ing. but then I was surprised because some of the poetry was actually short and they had a lot of wine. Good!

One guy I like a lot was William Carlos Williams because his stuff is shorter than tweeting. Sort of like the first tweeter in history. 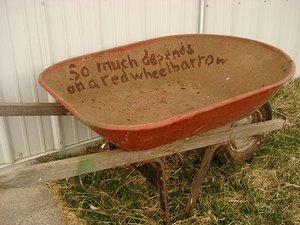 Sadie Cracker made me go to the poetry thing because she said I need to get out and meet real people and not just “stalk people” on the Internet. So I went and was not surprised to find most of the poetry was horrible.

Stan Bargemeyer read something about his knee socks and then my ex-boyfriend Jax got up and said we should all stop reading poetry and get out to the forest. Everyone cheered when he left.

Then Sadie got up and read about a red wheelbarrow. And she read it like she meant it and it was shorter than something I tweeted about my eyeshadow earlier in the day. “So much depends on a red wheelbarrow” she said.
I started laughing so hard I spilled the wine all over my white dress. “No it doesn’t.” I said so loud and everyone stared at me and started clapping.

When we left right after that I explained to her that “nothing depends on a red wheelbarrow anymore because we have cars and ride on lawnmowers and tractors.”

I don’t think she got it.

How To Take Selfless-ies : An LOL Mystery

May. 02 News no comments

by Marybell Davis, columnist, Snapchatter, Private Dick (which is so gross)

Being selfless is so weird. Like, why would you want to? The invention of Snapchat, Pinterest and Twitter–and a hundred years ago, YouTube and Facebook–showed us all how important each of our opinions are and how we feel at every, single minute is super-important. What’s a lot less shareable is what we do, so why would anyone do something selfless? I mean, it sounds nice, but if you can’t share it, did it even happen? 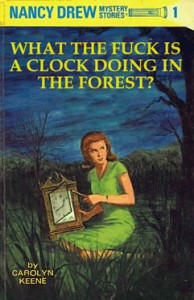 Recently my friend, Hope, said that maybe since I have so much time– because I can’t find a job that will pay me what I’m worth–maybe I should volunteer.
“What does that even mean,” I said.
“Well, some people are homeless,” Hope said. “And they need us to volunteer and help them.”
“How do you that?” I asked.
“No, not me,” she said. “I’m totally wiped taking graduate school classes in Library Science but maybe you should,” Hope said.

So, I decided to volunteer because maybe people will hire me as a private dick if they know I care about things like hammers and houses. At least it’s not spending time with people with cancer, which is so gross. It’s just building a house. Plus when I tweeted about it people were really proud of me.

So I went. And I tried to hammer a nail three times and it just didn’t work. I asked the manager if I could volunteer for something else because the hammer was really difficult and probably broken.

“Maybe I could volunteer with social media, you know, something that would let me look attractive and sound compassionate?” I said.

“No, we just build houses,” mean manager-guy said. “Maybe you can do drywall?”

I finally got it.

Mystery solved: Some people are just A LOT better talking about doing stuff on social media than actually doing something. Know who you are and don’t be selfish about sharing it.