It’s not because I love the ideas on Pinterest it’s because I’ve had this table for so long. What if I could make this table I love better?

So, I spent weekends sanding down the wood (it’s real) to have it become something. A table better and prettier than it was before. And I sand and sand until my fingers hurt and start to bleed.

“This is stupid, Mom,” said Ben. He’s 13 and everything is stupid, especially me. Plus, he’s really good at math.

“It is,” Ben said. “You work full time and that’s $40 an hour and all of the hours you don’t work are hours you could do something else.”

“Stop it.” I said. “This math is already too complicated for me.”

“My point is that you could do something you love rather than spend 3 more hours refurbishing this broken table,” Ben said.

And I look at Ben. He’s almost 14 now and he really means what he is saying right here.

“Maybe sanding this table is what I want to spend my time on,” I said. And I take the sand paper and I scrub and scrub the oak hoping it will look better and be something new and different I can love. Maybe all this care could make this table look like what it’s supposed to be because this table was so beautiful when I bought it 15 years ago.

“Maybe not. Maybe it can’t be because what you are doing is too hard,” Ben said. And he grabs the sandpaper, laughs, and he runs.

The Publisher of Coma News Daily says if I don’t stop writing about, “old people who get drunk and hang out in a bar” that he won’t publish this column, so, it’s Pink Floyd-Twister-Craft-Beer-Night at Bear’s Biker Bar. And two large bikers are coiled together unsure if their tree trunk leather thighs are on red or green Twister dots.

“What color did you just call out?” the biker in the tight leather said.

Bear is pouring himself a  “Banana Hammock” craft beer he created, which is based on Borat’s swim suit but with banana flavor. 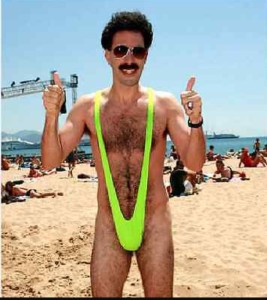 The craft beer called Banana Hammock has the subtle hint of a banana flavor.

“You’re not gonna give that gross beer to me you hippie!” yells my father, Stan, at Bear.

And Bear points to the two barely-21-year-old girls who have whipped cream on their thighs for no reason and are watching the spectacle of two overweight bikers tangle in Twister. The girls spin the wheel. They call out the primary colors.

“Oh, they don’t care about beer,” said my dad. “They just want someone to pay attention to them and it’s not for you or the two overweight bikers who are over 40.” 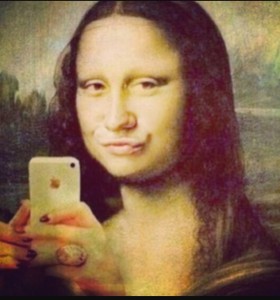 Bear looks at them and offers them a beer and both blondes shake their head, “No, we’re not eating,” they said.

“You want a banana hammock?”

“So you want a banana hammock? Because that’s the beer I’m serving.”

And I watch the young girls who’ve never been stretched by time or children and I watch them giggle because that’s what Bear is paying them to do since giggling cute girls seem to make men thirsty.

Charlie the Coma Librarian walks in with his guitar and a mandolin. He steps over the two bikers playing Twister on the floor and he laughs at the two nudish 20 year olds.

“What are you doing here?” he said.

“Advertising,”  said Bear. He’s barely 30 and a punk skate rat with tats who owns this bar and understands what advertising to millennials is.

“No, advertising,” said Bear. And, “I kind date the blonde one.”

“Which blonde one?” said Charlie.

And the song Comfortably Numb by Pink Floyd starts to play in the background:

Is there anybody in there?
Just nod if you can hear me
Is there anyone at home?

“Where are the nude men?” said Charlie.

“My wife was so beautiful even in her clothes,” said Stan.

“What do you mean?” said Bear.

“I mean, where are the almost-naked men or the 40-year-old women?” said Charlie.

“The 40-year-old woman is there,” Bear said, pointing to me. “And the almost-nude men are playing Twister and Stan might get almost nude if he decides to take his pants off.”

“I guess it just seems a little simple to use young women with whipped cream all over their bodies as a marketing ploy,” Charlie said. “I mean you can go on Instagram these days to see ‘artistic’ shots of young women nude.” 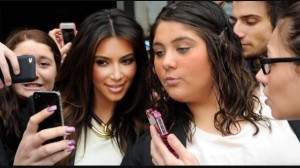 “In my day that was girlie magazines,” said Stan. “Now it’s on every phone kids are looking at.”

And I laugh and I drink my banana hammock and Charlie walks up on stage and starts to tune his guitar because it’s Pink Floyd Twister Night.

I look down at my body. It’s seen the ravages of children, exhaustion, and no time to exercise.

The bar door swings open. Dr. Jimmy and Alan Pezzati  from A Home For Those Guys come wandering in and walk straight toward the almost-nude 20 somethings. The girls giggle at them and maybe those girls will go home with them later and will have the kind of sex that happens when men can’t talk to you about their divorce, their loneliness, their dreams, their struggles, their children, and the concert they went to and rocked in the early 90s because the girl they are with says, “yeah, potty training and learning to count to ten was really what I rocked in the 90s”.

And Pink Floyd plays on:

And for those 10 to 15 minutes the void is filled with whipped-cream-dream of another body pressed up against you that makes you feel something that goes right back to being empty. You just press the like button on Instagram when you see  girl half naked. It’s a meaningless motion.

Dr. Jimmy comes over and asks Bear for a banana hammock for himself and one for the cute chick with the whipped cream that’s no longer whipped and more like lines of white foam falling down her thighs. And Bear said, “I’m kinda dating her.”

“No. I kinda am. Why don’t you hang with chicks closer to your age like Sadie.”

I laugh so hard I spit beer from my mouth all over my hands. All over this bar. And Jimmy looks at me and then at my hands and said, “what happened to your hands, Sadie?”

“I’ve been sanding down this old oak table and it’s been rough.”

“Why don’t you buy a new table?” Jimmy said.

“That’s what my son asked me, but the thing is I like the work. I like to take that old table and work on it and take care of it because the new thing isn’t necessarily better.”

And Pink Floyd ends their song:

And Jimmy stares at me for a minute and pushes a strand of hair out of my eyes and he said, “but new is good with whipped cream for 15 minutes and you don’t have to care if it gets messy.”

I pat his hand and said, “I’m talking about a table. No. Really loving that dumb old table is better. “

He laughs and up on the rag-tag-bar-stage Charlie taps on the mic. “Sadie Cracker, Sadie Cracker. You’re needed on the stage for Pink Floyd Twister night.”

So I stand up and walk to the stage past the whipped-cream-nightmare-dream-girls, who are whispering “who is Pink Floyd,”  and one says, “you know, the oldies band but they are okay” and I pick up my acoustic guitar.

And everyone in the bar laughed.

And I tap on the mic and strum the first three chords of ‘Wish You Were Here’ because there seems to be something we’re all missing.