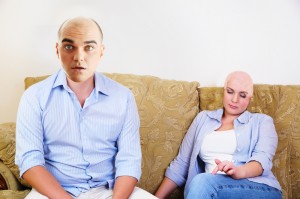 In what one witness has described as a “terrible, terrible accident” Coma resident Micah Horncraft “accidentally” shaved off all his wife’s hair and sold it on eBay. Horncraft claims the incident happened while the couple watched Antique Roadshow on PBS but declined to give more information as the couple is still trying to piece together the event.

“I messed up,” said Horncraft, Director of the Coma Futurist Society and former owner of  The Grape Hut.  “A series of unexpected events culminated in me shaving my wife bald and selling her hair.”

Horncraft was mortified to learn that his eBay auction item #155-98452-098332 had closed and he would be receiving a check for $14.60 but used the money to purchase lunch at da’Foot Bucket on Monday for his wife.

“The couple will not file charges against Antique Roadshow or Ebay,” says Coma Sheriff Paul T. Frostnib. “And that’s a relief because everyone loves Antique Roadshow. I just had a hummel appraised by them for $450.”

“Not sure how you ‘accidentally’ shave anything? Seems like something you would do if you were upset with someone,” Robert McGuiness former Coma News reporter said. “In theory a person would have to know you were shaving  them or you would have to have the person tied down or drugged during the process.”

Friends have rallied around Cindy Horncraft creating ‘bald is beautiful’ tee-shirts and sending casseroles and wigs to support the family during this difficult time.

“Bald or not she’s still a very effective woman,” commented Horncraft’s friend and avid ghost hunter Jax Owen. Owen, Car Dealer and now running for political office in Coma, has spent months at the couple’s home trying to help them locate a noisy apparition that has made it impossible for them to sleep in the same bed. 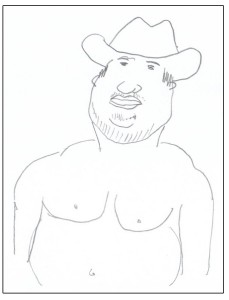 A sketch of the ghost Horncraft claims haunts his home