By Coma News Staff
Does she got a ticket to sled? She will soon under the Town Council’s enactment this week of a ban, tax, and licensing requirement for the previously carefree winter activity of sledding.
Sledding in Coma parks will be banned while sledders on private property will be required to be licensed and pay a $500 per-child annual fee.
“We wouldn’t allow children to drive through our parks, and certainly wouldn’t allow them to do so without being properly licensed, so consistency is a big driver behind this,” said Councilwoman Natalie Peters who was a leading proponent of the Sled Safety (SS) ordinance.
Effective immediately, sledders will be required to complete an eight week course of class work and real-world sledding lessons from certified instructors. 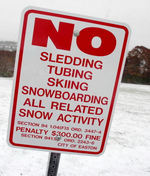 Mayor Dave Anderson said the initiative is about children’s safety and has nothing to do with trying close the town’s $550,000 budget deficit.
“It’s no easy legislative feat to enact the triple threat of a ban/tax/licensing requirement, so we’re pretty proud of the old SS ordinance,” Anderson said.
Councilman Jax Owen was forced to recuse himself from the vote since he operates Sled World, the largest winter amusement park in town.
“Will this impact my business? That’s pretty freaking obvious,” Owen said, when asked about the new recreational regulatory regime.
The ordinance vote also drew a recent-record audience of one resident in opposition.
“I’m still looking for the medication that will allow me to stop caring what these baboons are doing,” Robert McGuiness, a local gadfly, said in an interview after the vote. “Where’s that bloke with the peyote?”