By Thomas Steven John, Future News Reporter
A pair of fuzzy slippers, three garden gnomes and a non-pet tortoise will be among the items mistakenly seized during this weekend’s annual Coma animal cull.
The wackily inappropriate victims of Coma’s long-standing program to reduce the surplus animal population that has never actually reduced a pet or allowed surreptitious removal of nuisance animals came to this reporter in a peyote-fueled fever dream. 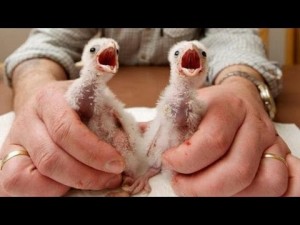 These birds will not be picked up in the cull they are an example of how unattractive baby birds are.

The annual cull entails teams of town officials and deputized “vigilantes” fanning out across Coma over a designated 24 hours to seize any animal outdoors, behind loose fencing or in houses that are not locked.

“Now they’re seizing lawn ornaments?” Bob McGuiness said when told about the impending loss of his gnomes. “When is it ever going to stop?”
Coma Mayor Dave Anderson, who was reached for comment during his summer-long official hiatus, shrugged off the impending loss of non-pet related items.
“You gotta break a few gnomes to give the people what they want,” he said.
Coma Town Councilmember Natalie Peters expressed relief when told that no parakeets were among the seized and destroyed pets. As the primary proponent of an effort to confer human rights on parakeets, Peters said she is conflicted about the annual event. 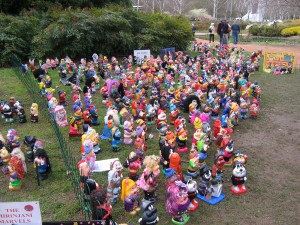 These garden gnomes were caught as a result of the cull. They are the only animals that will be seized in this event.

“So many owners are not taking proper care of their pets and the should never have gotten animals in the first place,” Peters said. “Plus, there are an awful lot of annoying pets out there.”