Coma author Dee Collins celebrated the release of her latest children’s book this week at a book signing at the Coma Post Office. Titled “Boy with Ham Hands Reads Harry Potter,” the book tells the story of Owen as he reads a Harry Potter book over the course of an afternoon. 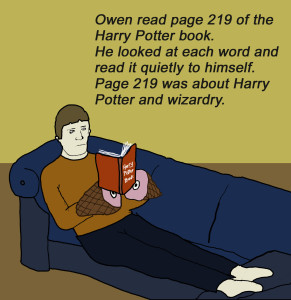 According to Collins, the book has a message for children of all ages.

“I think a lot of people are afraid to read because it’s sort of this strange, mysterious thing,” the author and founding member of the ‘Coma Players’ said. “I wanted to write a book that demonstrates that reading is actually not very mysterious and anyone can do it.”

In the book, Owen finds himself alone on a rainy afternoon. The young boy tries to watch TV but his ham-hands prevent him from using the remote control. The boy tries to text and use his iPhone but his ham hands impede him from texting or snapchatting.  Frustrated, he picks up a Harry Potter book and begins reading it. The final 46 pages of the children’s book show Owen sitting in different positions on his couch reading. 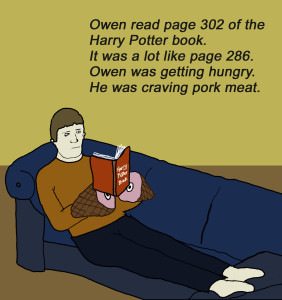 At one point, Owen gets hungry and decides to make a snack. After not being able to find anything suitable, the boy begins to devour his own ham-hands.

Some early reviews posted on the author’s website have been less-than-flattering to Collins’ latest effort. According to a review by Coma resident, Bob Smith-Smith, the book “bleeds misplaced sentimentality for a by-gone era.” Plus, Smith-Smith says, it’s “extremely tedious.”

“There are more than 40 pages that simply states any minor adjustment this kid makes on the couch,” Smith-Smith said in his review. “And don’t even get me started on the macabre nature of him eating his own hands.”

Collins said criticism comes with the territory but she is confident children will take to the book because of the painstaking detail and realism.

“When you finish reading this book you will feel like you spent an entire afternoon on the couch reading a Harry Potter book and eating your own hands,” Collins said. “What could be better than that to teach the love of reading versus using electronic devices?”

“Boy with Ham Hands Reads Harry Potter” goes on sale next Tuesday at Bob’s Grocery store next to the ipod section.