Coma was the setting of this week’s soft launch of the newest Apple product, the iphonograph.

The product was intended to breath new life into the long-stagnant vinyl record industry. Ten people lined up to be the first to test the brand new product outside Alan’s Vape and Vinyl (and courthouse) yesterday. 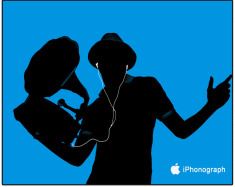 “Most people are not yet evolved enough to own records and their taste in music remains pedestrian” said Judge Pezzati. “But if you are going to own a record, then you better have the right kind of technology to enjoy it anywhere.”

Apple pitched the iPhonograph as a new way to listen to music in an era when digital recordings have allowed hearing “any music at any moment, unfortunately including Taylor Swift”.

The technology is difficult to use during physical activities such as running or biking.

“It sounded like a really good idea in my head,” said Chase Donovan Coma teenager, who snagged an early iPhonograph. “But when I hold it, I just felt like my grandpa back when the only colors they had were black and white. But it’s from Apple so I guess I have to love it.”

Another challenge of the device was trying to carry around a larger selection of music. 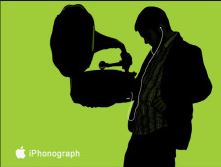 “Walking around with a phonograph in one hand and 30 pound bag of stupid records in the other?” said Jax Owen, coma businessman. “Why can’t they bring back something cool, like the boom box and Poison?”