The decision, which Pezzati read from the bench, torpedoed the emerging legal theory first championed by the
Bloodhound Gang in their song “The Bad Touch.” 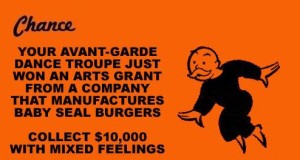 If Lady Justice is blind she could easily be a bald, old, white guy and would have no idea.

The defendant, Micah Horncraft, said he was shocked and saddened by the ruling.

“I always thought the song’s logic was pretty airtight,” Horncraft said as he left the courthouse, which also house’s the judge’s business, Alan’s Vape and Vinyl. “Who could have anticipated the song’s reasoning would break down when applying it to car-driving dogs?”

Horncraft’s defense posited that his driving speed and precision were infinitely better than his dog’s driving would have been in the same circumstances.

The case’s impact was quickly felt by numerous town residents.

“Canada may have recently legalized bestiality but this ain’t Canada, Jack” Stan Bargmeyer said, apparently about a different case.

Pezzati’s decision striking down the “mammal defense” rested on the vagueness of the lyrics.

“Let me be Pacific I wanna be down in your South Seas; But I got this notion that the motion of your ocean means ‘Small Craft Advisory,'” Pezzati said. “Terrible rhymes, weird nautical theme, and what’s up with the child-speak word play?”

← Millionaire Thanks Town for Charging Station
This Day in History: Cat Park Invented →