The injuries occured after Marybell Davis, a local resident, created a new exercise class that mounted stationary spin equipment on a flatbed truck and drove students around town.

Repeated injuries occurred as the truck stopped suddenly for cows, people, and slow moving vehicles–like the bus for the Coma active living community.

“It was a great idea until we realized that we would have to stop for essentially anything that moves.” said Sadie Cracker who was driving the truck. “The idea of being outside and moving while on a stationary bike was amazing until the reality of a flatbed truck sunk in”. 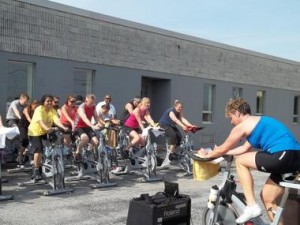 Putting the cycling exercise class on a flat bed blaring music added a new dangerous ‘spin’ to the activity.

Three people received minor concussions from falling off the the flatbed truck. Four people had sprains and one person had a broken arm. Stan Bargemeyer of Coma stubbed his toe while trying to climb in to the truck.

“I thought since we tied all the bikes down real tight everything would be fine.” said Marybell Davis, Coma private investigator and mobile spin class creator, who added “LOL.”

There are many ideas proposed to add “safety ” to the curriculum of the mobile flatbed outdoor spin class. One idea from Mayor Anderson was to “ride a bicycle outside, instead.” But that was rejected by members of the Town Council, including Natalie Peters who said that “wasn’t enough.” Peters suggested seat belts, protective body suits with padding and maybe even NASCAR-themed helmets for the-outdoor-flat-bed-spin students.