According to several eyewitnesses, a Sasquatch made a ten-minute presentation at a multi-level marketing workshop in Coma last week.  The event, held at the offices of Coma Realty, Travel and Beauty Supplies, attracted nearly ten guests who came to view a presentation on LifeCare, a company specializing in lifestyle, home and health products for independent business owners.

Witnesses reported that about half-way through the presentation, a very large, hairy creature dressed in a sharp Armani suit entered the room and began a hard-to-follow, yet somehow “succinct”, presentation on the benefits of joining LifeCare’s lucrative distribution team.

“He was really focused on building your down-line and the recruitment incentives they offer,” Chase Donovan, a local teen who attended the presentation, said. “At least I think that’s what he was talking about.” 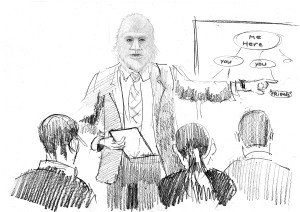 ABOVE: Artist rendition of what witnesses claim was a bigfoot sighting at a recent LifeCare meeting

The LifeCare presentation started at 7 p.m. with a series of successful testimonials from long-time independent business owners. Mayor Dave Anderson, who has been a LifeCare representative for nearly nine years, lead off the evening and discussed how in just nine short years, he’s made nearly $300 selling the LifeCare line of products, which includes lice shampoo, a nondescript ointment labeled simply “Ointment” and hairspray in aerosol cans.

According to planners, the Sasquatch presentation was unexpected.

“I nearly shat myself,” Anderson said. “I was getting ready to introduce a video by LifeCare founder Alexander Moss and suddenly this freakishly large dude walks in and takes over the meeting. Am I using the term ‘shat’ correctly?”

Eyewitnesses said the hairy, mysterious anthropological creature peppered a series of grunts, snorts and what one person called “halted screams” into his presentation as he stood near a flip chart trying to explain the distribution hierarchy.

“I think I got more from his presentation than all the others,” Donovan said. “At one point he showed us a photo of a large bundle of sticks and pounded on his chest.  I think he somehow earned those sticks through LifeCare? But, by that point I was getting really confused. But he sure seemed proud of all those sticks.”

The mysterious creature ended his presentation abruptly when one attendee began asking questions about whether LifeCare was merely a pyramid scheme.  According to witnesses, the Bigfoot creature began waving his arms wildly, flipped over a table and stormed out of the room.