May. 18 Sports no comments

A pick-up basketball game at the Coma City Park was interrupted last week after participants claimed a Sasquatch sat down near the court and indicated he “got next”.  The incident marks the third reported sighting of bigfoot in Coma this year and left witnesses shaken.

“I almost crapped myself,” Coma teen Chase Donovan said.  “Can I say ‘crapped myself’ on an internet news site?”

According to eyewitnesses, the giant, hair-covered figure emerged from a nearby restroom midway through a friendly, yet competitive, three-on-three basketball game.  After watching from afar for several minutes, Bigfoot approached a bench near the court, relaced his shoes and then sat down. 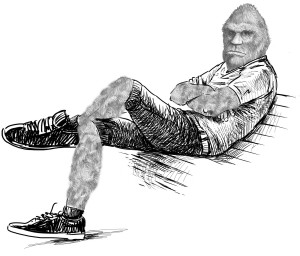 According to amateur cryptozoologist, Micah Horncraft, while it is rare for Bigfoot to play recreational team sports, it is not unheard of.

“There have been accounts of Bigfoot engaging in volleyball games and even gymnastics,” Horncraft said.  “It is much more common for them to stick to their own cultural games like hit-stick-rock and leaf-on-head-leaf-tucked-in-shoe-don’t-touch-leaf.

Donovan said that he and his friends left the court following their game but watched from a distance as bigfoot sat slumped on the park bench shaking his head.

“I think he was sad that no one wanted to play with him,” Donovan said.  “But forget that.  Who wants to match up with him in the paint?”