Pounding pulses Monday at the outdoor Coma chess tournament resulted in one of the finalists suffering a mild heart attack.
Jonny Douglas, 78, was expected to recover after he was rushed to the hospital during a rain drenched match in the months-long tournament.
“The stress of any game, exposure, and exhaustion can be a deadly mix–no matter how little the athlete moves,” said Dr. Jimmy.
The tournament, which is sponsored by Coma Cemetary (a cemetery), has has taken a surprisingly tragic turn since it was launched in March.

“Poppy Brandies died last Tuesday of the pertussis before playing his last round again Janice Michaels who was subbing in for Doris Redding who is stuck in the assisted living facility with pneumonia,” said Stan Bargemeyer, Coma News intern and a tournament participant.
Most matches have ended in a draw after residents either withdrew due to  mental health problems, death or months-long physical sickness.
“Some say this game is cursed,”said Micah Horncraft, 38, who is by far the youngest player. “I find the drama of life on display here thrilling and the chess is fun, as well.”
Not everyone enjoys the ongoing death matches. 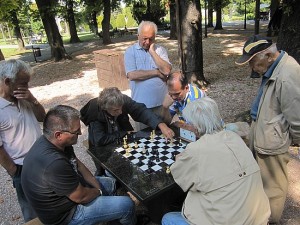 The outdoor matches have Coma citizens wondering, “Will my opponent still be here when the clock stops?” .

“The whole thing was orchestrated to get participants to purchase their plots and caskets from ‘Coma Cemetary’ for half price,” said Robert McGuiness. “But the effect it’s having now mainly seems focused on filling coffins.” 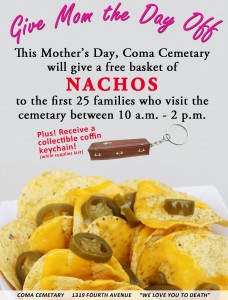 The Town of Coma Cemetary (a cemetery) saw much success in it’s Nacho’s for Mother’s Day campaign and is now looking to broaden it’s brand into multiple sponsorships in the community.

Bob Smith-Smith, Town Council member and owner of the cemetery, pushed back on safety concerns linked to the tournament.
“This is about these players soldering on through disappearing memories, cataract – induced blindness and yes, even death,” Smith-Smith said.
“The only option we have, really, is to enact an ordinance barring death from chess matches and I can tell you from past experience that that’s a pretty heavy legislative lift.”