Despite that, every entreaty for his family to “get off the internet” and “stop typing on your iPhone” can be heard in every room of his house.
Horncraft’s new ability did not stem from his acquiring godlike omniscience but from him acquiring a tiny house. 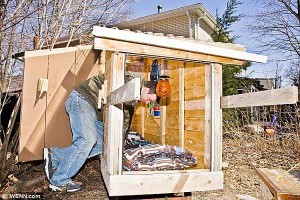 Sometimes a micro house can be so tiny you find you can’t fit in it. It is possible that a tent would be a better option for these people.

“My wife and I were looking for better ways to connect with our child and the only solution was a tiny house,” said Horncraft. “In a regular house you can run away from each other and slam doors. In a tiny house there’s nowhere to go unless you want to go outside to wash your clothes in the river.”
Horncraft and his wife, Cindy, became the first Coma owners of an 80 square foot tiny house this summer. The move was prompted, he said, by his desire to repair his marriage after accidentally selling his wife’s hair on eBay.
Horncraft hopes the close quarters also brings a closer relationship with his teenage son, Sean, who blames Horncraft for “ruining my life.”
“Yeah. It’s great,” Sean said about the new house. “I’ve started spending more time inside my car.”

Before micro living in a tiny house became popular people would simplify by living inside a car.

Other Coma residents have echoed Horncraft’s desire to unplug from technology and to return to a simpler time.

“Why not cut off devices and talk to one another?” Robert McGuiness wrote recently as his Facebook status.
Many of the Facebook responses to McGuiness rejected the idea that a great way to communicate would be face to face but some suggested that bringing back notebook paper notes might be a good ‘retro’ idea. Other Coma residents maintained note passing creates paper waste.
Micah said the first weeks of life in his tiny house have “gone great.”
“Communication is a lot clearer, and my wife and son have developed a tremendous love for the outdoors,” he said

Tags: tiny house
← Training Camp Full of Surprises
Fire to Strike a Home for Those Guys →