Not Crazy About Coma Mad Scientists

Has the time finally come to replace Coma Tech’s Mad Scientists mascot with something less offensive?
I think so.
Why?
The answer to this question is both complex and simple.  The simple
answer is that they are disrespectful and hurtful to scientists and science-minded peoples.

Not long ago, I was at a Coma Tech game and their ludicrous mascot was pretending to lobodomize the opposing team’s indigenous mascot. Ok, just because American scientists have practiced such discredited eugenics practices against “undesirables” in the past doesn’t mean it’s reflective of today’s scientific leading lights. 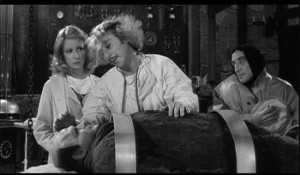 As a one-time physics major, let me disabuse mainstream Coma residents of some facts about this mascot that they just doesnt “get”:

1. “We are honoring scientists”

There are so many things I can tell you about the sports team names,
mascots and imagery that are anything but an ‘honor’ that it would take up more time than you have to read.  So let’s just hit the basics – the ‘MS’ phrase is slanderous, not an honor.
Mascots and fans dressing up like ‘scientists’ is insulting and highly offensive, not an honor.
Fans performing ‘labodomy stabs’ at games are insulting and highly offensive.

2.  “I know geologists who have no problem with ‘mad scientist’ mascots”

Let me say right here that I am fully aware that some of our science magnet schools use names like ‘Math Lunatics’ or ‘Nutty Professors’.  This is where the issue gets complex.  You see, often these names were not chosen by our science students, but by the non-scientist (probably jocks) who provided the money to start those schools.

What, for crying out loud, is ‘political’ about being correct?  Anyone who whines about being asked to be respectful and do the right thing to science weavers is a coward and a crybaby.

4.  How do these mascots/team names hurt science-y people?

Well, for starters, they insult. On a larger scale, “science” mascots serve to trivialize us as a left-brained people. This has gone on for centuries (Hello, Dr. Frankenstein), and it served it’s purpose then as it does now. So much for the ‘progress of civilization.’ Instead of portraying us as soul-less, controlling nutjobs, look us as people who are socially awkward and excited about beakers.

It’s time to include us in the national conversation. Bill Gates is no awkward, gangly joke.