By Stan Bargmeyer, Coma News Intern
It’s not every day that a dog drives the fashion industry.

You wouldn’t know it by looking at their descendants but Coma’s dogs once dictated the fashion sense of the entire town.

At the turn of the twentieth century Coma was a bustling and growing town riding the brief and explosive methane production wave.

It was amid this excitement that Georges Von Peebles, a Swiss immigrant, moved to town and started making dog accessories. It started with fancy collars but soon  progressed to hats, pants, hoop skirts and parasols–all for dogs. 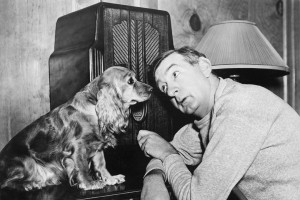 Georges Von Peebles knew that Mr. Sparky longed to have his own purse and other accessories.

But the most prominent canine fashion accessory developed by Von Peebles was the purse. Dogs wore it to carry various grooming supplies, snacks and, of course, money.

The accessory soon caught on with local women, who also had a need to surreptitiously carry snacks with them.

However, for complex reasons these trendsetting lady animals eventually abandoned their push against the glass doghouse and rejoined the crotch-sniffing status of their male counterparts.