Opinion: I Went to School with Billy Joel

Opinion: Went to School with Billy Joel But Not Sure if he is the Famous One

I went to high school with a guy named Billy Joel but I’m not certain if he is Billy Joel the famous singer and songwriter. I’ve asked some friends and most of them say it probably isn’t the same Billy Joel who had commercial success in the 1970s and 1980s with hit songs like “The Man Who Plays the Piano” and “Thriller.”

How likely is it that there would be two people with the exact same name? 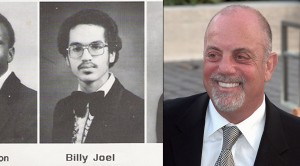 Even after looking at my old high school yearbook, I can’t tell if the Billy Joel I went to high school with (left) is the same one who made a lot of successful music (right)

The Billy Joel I knew from high school didn’t graduate. He was into small engine repair and I heard he got a job at a lawnmower repair shop a few years after high school.  He liked to party and had a big Rottweiler dog who once peed on the tire of my car.

Billy Joel just laughed and told me that dogs like to piss on car tires.

I’ve never seen pictures of the famous Billy Joel with a Rottweiler but that doesn’t mean he didn’t own one at one time. I’ve also not seen anything about the singer Billy Joel regarding a passion for re-building small engines and juicing-up lawnmowers. But again, that’s not proof that it’s not the same guy I went to high school with.

The Billy Joel I knew had four or five children with several different women. I also know that when he was 30 he suffered some severe burns on his face after throwing a gas can into a bonfire. Again, when I ask people if they know if the famous Billy Joel had these things happen to him, they will say no or they aren’t sure.  It is frustrating because it makes me feel like there is a chance it is the same Billy Joel.

I don’t remember my Billy Joel singing songs or writing music, but maybe he liked to keep that private and only do it on the radio or in front of thousands of people.

After more than 25 years of research, I don’t know if the Billy Joel I went to high school with is the same one that wrote the song “We Don’t Start Fires.”

I think it’s suspicious that he wrote a song about fire and the Billy Joel I know had most of his face burned off.

Is that just a coincidence?  Or was the song autobiographical?