Tragedy struck Coma’s first all-animal rendition of the famous Ancient Greek comedy “Lysistrata” Monday when one of the players assaulted the director.

Shane Darvis, the former director of CATS, was recovering at home Monday night from a series of defensive wounds he received earlier in the day from one of his lead actors, Gary, a descendant of Coma’s famous fighting chickens of the Civil War. Gary is one of several chickens Darvis recruited for the play, which also includes cats and dogs. 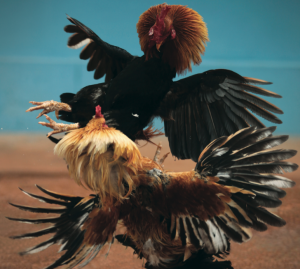 Gary, pictured here, is a decedent of the original Fighting Chickens of the Civil War.

“We didn’t think the chickens would fight on stage,” said Darvis. “Apparently, unleashing the aggression breeding instilled in their forbearers is more important to them than providing quality theater.”

Darvis recruited the chickens and other animals after he was unable to convince any Coma women to perform in the play.

“Women are pretty important for this play but certainly not indispensable,” said Darvis, who plans to play the lead character, Lysistrata. “However, dropping the chickens is going to be a big loss.”

Dee Collins, sometime actor and screenplay author, said she turned down a role in the play “mainly because Lysistrata is kind of boring.”
Several other veterans of the Coma Players, said daily activities, like “washing my hair” were more important than any level of involvement in the play.

Robert McGuiness, a former Coma News reporter, said the impending play “was never that great to begin with and of course we are going to do it in such a shitty way as to render it unwatchable.”
The production continued to grapple with numerous additional challenges, Darvis said. For instance, several of the characters portrayed by dogs have gone into heat, which resulted in behavior inconsistent with the play’s central theme.

“Animals are, at the end of the day, painfully stupid,” Davis said. “But it’s still a cakewalk compared to working with human actors.”