Hats (And Pants) Off to Tuesdays

May. 09 News no comments

Residents living in Coma’s largest and most influential neighborhood better start checking their wardrobes.
The board of the All-Drama Homeowners Association (HOA) will vote next week to require neighborhood residents to wear fancy hats and no pants every Tuesday. 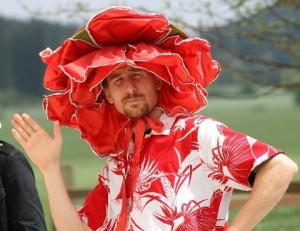 This man has a hat on that is so fancy he doesn’t need to wear pants.

The future news came to this reporter in a Peyote-fueled fever dream.
“This is a morale booster because members of the HOA board agree that Tuesdays make us sad.” said Dee Collins, the HOA’s treasurer.
The sprawling HOA encompasses several Coma neighborhoods including the heavily populated reminants of the “Actors and Musicians Trailer Park” which is sponsored by the Coma Players.
The members of the failed artists community dominate the leadership ranks of the HOA since other residents rarely participate due to time-consuming demands of jobs, bathing and attending Starbucks two for one Frappe afternoons.

“They’re gonna what?” said Robert McGuiness, a neighborhood resident, when told of the impending rules. “Can I at least wear a bloody kilt?”

The split has produced some tension between the HOA and “normals,” neighborhood leaders said.
“The public rarely understands or appreciates how much these people have to suffer for their art,” Marlee Bumgartner, Coma activist and shut-in, said about her fellow HOA leaders. “And a great way for them to learn is to make them free themselves from their pants.”
Bumgartner uses Skype, Facebook and Twitter to perform with the Coma Players and to serve on the HOA board since she rarely leaves the house.