May. 26 Coma History no comments

In the fall of 1972, Coma scientist Richard Van Peele announced his discovery of a new type of fish species; the Ladybug Fish (dominaeinsectum piscor). The discovery sent ripples through the marine biology community as the Ladybug Fish proved to be one of the most unique aquatic mammals ever discovered.

Unlike most fish, the Ladybug Fish lives entirely on land and bears a striking resemblance to a Ladybug.  As well, Ladybug Fish do not have gills, are the same size as Ladybugs and look exactly like common Ladybugs in every conceivable manner.  In fact, the Ladybug Fish is the only fish in the world that cannot survive under water. 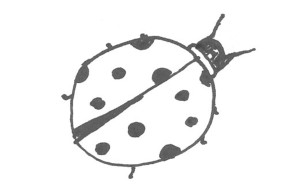 ABOVE: A sketch of the rare Ladybug Fish discovered by Richard Van Peele.

Van Peele, who studied marine biology in his bedroom while holding down two part-time jobs, was a Coma native who later went on to serve as night-time supervisor at the Zip-In Burger on 8th Street in Coma.  Van Peele died in 1994.