The downside of the Badass hookup is the chance of losing someone you care about in the Zombie apocalypse based on experts’ opinions is 93%. And basically there are two types of surviving Badasses. The ones you met before the Apocalypse and the ones you are with during the apocalypse. 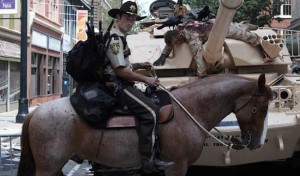 The safe Badass you know. He doesn’t look like the Badass pictured here but this gives you an idea.

Badass Hookup #1: The Badass you are with. The Badass in your life who could find canned Spam in a world without food. The Badass who loved you when you were splattered with blood and brains and carrying an AK-47. The Badass who told you not to cry when your sister went missing in the fog while trying to forage for berries and then he was the Badass who put a bullet in her head when she returned to the camp as a flesh eating Zombie.

How do you deal when you lose the love of your life to a flesh eating Zombie who pulls off their arm and eats in front of you? Or worse- how do you put a bullet in the head of someone you love once they’ve been bitten on their shoulder and will inevitably turn into Zombie who eats your intestines as a first course?

Remember– your Badass made a mistake, got himself bitten and now he’s turned in to a vacant flesh eater. You’ve got to save yourself. 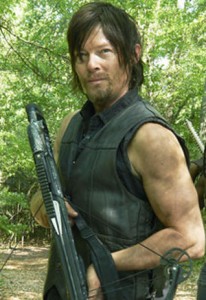 The Badass you can’t find who drives a motorcycle and can hunt with a crossbow.

Badass Hookup #2: The Badass who is out there who you can’t find during the Zombie Apocalypse.

You meet a Badass prior to the Apocalypse and you talk to them for months on end but never physically see them.  You virtually see them all the time through text and email and you imagine them naked (gross) or kissing you (okay) and then you meet them.

You realize they are an animated real live Badass person.

You had a conversation about how you would meet up during the Zombie Apocalypse. The Badass tells you to head South to Rendezvous in some woods near a creek.

It begins in the South.

You look at a map and realize the Badass never told you exactly where the woods were located and you don’t have the name of the woods or creek. All you have is his general geo location.

Your Badass goes missing, his directions were shoddy and you don’t have many options to find him—the Zombie Apocalypse happened and Zombies are eating people left and right.

The only choice you have is to miss who you miss when they are missing. Think about the badass for a minute and then let the feeling go because you have to survive. There are hundreds of thousands of flesh eating Zombies trying to eat you for lunch.

For now hole up, keep the lights off, don’t scream, miss what you miss and find another badass guy. Better yet, find two Badass guys and keep your options open during the apocalypse.

There are lots of men who own crossbows and guns who survive during the Zombie Apocalypse.

They are not hard to find they are the only ones capable of surviving. Damn Badasses.