Coma School Board member James W. Jacob “Jake” Smyth made and lost several fortunes as he worked his way from sales clerk to a well-known town elderman.

But the Coma man, who moved here from England when he was 15, found himself embroiled in scandal in the 1930s while operating the largest laundry service in Coma. 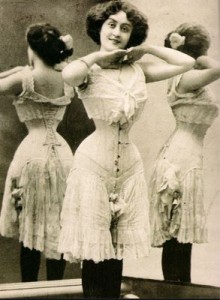 Coma History: Missing panties on an epic scale cost one Coma man his career, savings, and freedom. But were they ever found?

Jonathan T Buttontop was the first to raise concerns about Smyth potentially embezzling thousands of pairs of women’s underwear from his patrons. It took months for the accusations to gain traction, but Buttontop refused to let the matter drop.

Criminal charges were first lodged against Smyth in April 1932 and an indictment followed five months later.

Customers also filed the first class action in Coma asking a judge to force Smyth to reimburse them for the lost–and now unwanted–panties.

Coma News Daily reported on Dec. 2, 1933 what  the newspaper article called “a victory not just for local lady-persons, but also for Mr. Buttontop.”

His “one-man fight … has borne fruit–of the loom,” the newspaper article stated.

At a subsequent trial, Smyth plead no contest to four charges related to the embezzlement of 48,189 pairs of panties.

At his sentencing to serve five to 10 years in the State Penitentiary, Smyth stood in the packed courtroom “nattily attired in a blue suit, blue tie to match, white silk panties in his coat pocket with his rimmed glasses held in place by his characteristic black ribbon,” Coma News Daily reported on Nov. 17, 1934.

Before leaving Coma, Smyth was quoted as saying “I bear no ill will against anyone or their undergarments” and expressed hope that he would pay his debt to society and then return to Coma, an article on May 21, 1935, reported.

It was not clear when exactly Smyth was released. He died at his daughter’s home on Eighth Avenue in April 1951 after suffering a heart attack.

None of the missing panties were ever recovered.