Many people know that Coma is home to the popular protein-infused beverage, Liquid Ham, but what most people don’t know is that Liquid Ham was originally called MeatJuice and was the result of the invention of the world’s first meat wetter.

The meat wetter was invented in Coma in 1902 by postal worker Samuel K. Newman. Newman was looking for a convenient way to extract juice from his favorite meats. After several years of development and more than three dozen prototypes, the meat wetter was born. 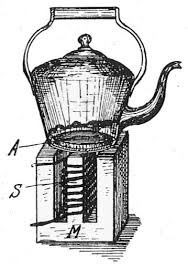 ABOVE: Newman’s drawing of the original meat wetter.

The device resembled a kettle or tea pot with holes in the bottom. The kettle was perched on a special “liquid drip chamber.” By heating the kettle, adding water and applying pressure, the sweet nectar of the meat was released down the chamber and into a “dry basin” where it was transferred to cups or fancy drink ware.

Newman later bottled the beverage and began selling it as “MeatJuice” and later, “CowMeatJuice” before selling the company to Arthur Linscomb, the founder of Liquid Ham. 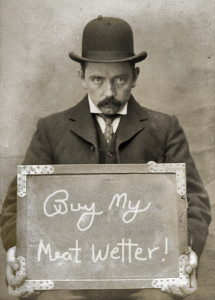 ABOVE: Newman marketed his invention through an aggressive ad campaign demanding people purchase his invention.

Although only a few dozen meat wetters were sold world wide, the invention did help spawn one of the most popular sports drinks for people who like prefer to drink pork.

Newman died in 1938 after suffering a massive heart attack.

← Where Do the Missing Go?
Podcast: A Hazy Shade of Sasquatch →