This reporter learned about the strike–set to begin this weekend, to coincide with several planned rounds of ouija boarding–in a peyote fueled nightmare. The visions appeared after falling asleep during a Paranormal Activity marathon. 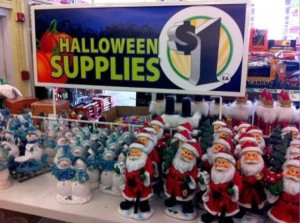 Bloody walls, disturbing messages on bathroom mirrors and other standard haunting steps should not be expected at any house decorated with dancing pumpkins and skeletons or pun based tombstones.

The ghostly collective will state their demands as well as the consequences of not heeding their warnings at an otherwise deserted 3 a.m. meeting at Town Hall featuring some of Coma’s most notable and deadest citizens.

Mayor Dave Anderson will bring in an official pagan witch to perform a protective ceremony, which he is counting on to be ineffective.

“Considering I’m mid-campaign I’d like to stay on good terms with all of Coma’s residents, and the dead ones are very active voters–wink, wink,” Anderson said, when asked about the coming haunt stoppage.

Citizens will not agree to remove their Halloween decorations, some of which have been up for years. Some tasteless residents will refuse to remove their brick-a-brack out of principle, while others won’t believe in ghosts and assume the apparitions were caused by another round of tampering with the town’s water supply.

The legislative and political ramifications of this year’s Halloween may make it Coma’s scariest one yet.