by Micah Horncraft, President of Coma Futurist Society, Owner of a ‘tiny house’

Us ham radio guys like two things in this world; quality dialogue about ham radio correspondence and early twentieth century technology. I am at my wit’s end with the utter lack of quality ham radio operators in the region and am ready to give up and pursue more “rewarding experiences” such as CB communication in my smart car or rebuilding (and reselling) typewriters for college students and selling them on ebay. 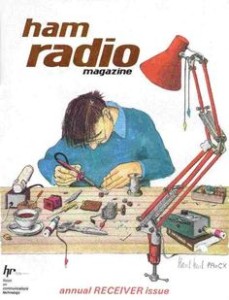 Like most people, I first fell in love with the ham radio as a teenager.  Since that time, it has become clear that more and more young people are picking up smart phones and tablets instead of the ham radio.  This is troubling to me because there is a whole generation who is not going to have the experience of operating a complicated ham radio.  Additionally, they will miss out on the stimulating conversation, joke telling and discussions about frequency changes you just don’t get on popular social media like Twitter.

It used to be I could spend a whole evening discussing things like where a person was transmitting from, what objects were in the room they were transmitting from, what the weather was like in their area or even about what other ham radio operators they had contacted that evening.  It was captivating because it was real.  And it was fun!  Sometimes I’d make stuff up by telling the person I was speaking to that there was a fairly strong wind gust in my area!  And they’d believe it! Of course I would tell them the truth eventually; it was only slightly overcast with a forty-percent chance of rain.  But nobody got hurt and it was understood that sometimes ham radio operators would make up stuff regarding weather.

So I am issuing a challenge to our community’s young people; put down your smart phones and pagers and pick up a ham radio! Start to engage with people on a whole new level.  Experience meaningful conversations about proper radio etiquette, popular styles of receivers and headphones and discussions about hypothetical FCC regulatory matters. Your life will be richer and my nights will be far more interesting.