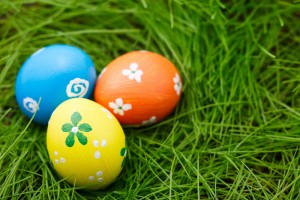 “I hate giving up but with all the leaves cluttering up the grass and the limited daylight hours, it’s not likely we are going to retrieve those eggs,” Buckley said.

Buckley and his wife, Norma, hid more than ten dozen plastic Easter eggs on Easter morning in April.  All but five of the eggs were discovered during the annual egg hunt that afternoon.  Two more were found several days later.

In July, Buckley found one of the missing eggs near some decorative rocks in front of his house while pulling weeds.

Buckley’s search included more than four dozen sweeps of his yard, significant costs associated with renting surveyor equipment, and hours and hours of crawling around on his lawn in search of the two missing eggs.  According to Buckley’s wife, the project put a tremendous strain on their marriage.

“He would be out there in the middle of the night with a flashlight and some contraption that looked like a metal detector,” Norma Buckley said.  “I would call out to him to get his ass back in the house because he was being a fool.”

According to Norma, her husband would typically wave her off and say “what if it was me lost out here in the grass?  Would you just give up and go to bed?”

Buckley said last week he realized his days were numbered, especially with the change in seasons and daylight savings.

“Those two little plastic eggs with M&Ms inside are just lost to Mother Nature at this point,” Buckley said.  “I feel like I let them down.”

Buckley announced the end to the search during breakfast yesterday morning while running his fork through a pile of scrambled eggs.

← Mailbox ‘Hat’ Invented in Coma
Buy My Screenplay ‘The Fifth Sense: a Prequel’ →