Powerful winds drive both ships and aircraft but together they drive destruction.
That was the painful lesson learned by Coma native and inventor Adm. Eustis Antilles when he created the sail-powered aircraft carrier in 1859.
Antilles’ innovation came in the lead up to the Civil War, which also was the waning days of sail-powered warships. A bit of a contrarian, Antilles rejected the growing concensus that steam and coal power were the fiture for ships.
And given his position as a confident and bowdy-night wingman of Navy Sec. Henry Seward, Antilles was able to push through construction of the first and only “sailcraft carrier,” the USS AirBlow. 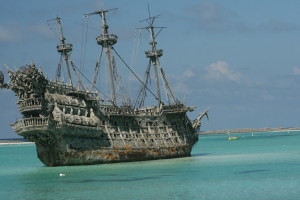 “It was as majestic as a mountain and as graceful as a swan,” Antilles wrote in his diary about the ship.
It was only after building the ship that Navy leaders realized powered aircraft had not yet been invented. Undeterred, they tried using the ship as a landing platform for hot air balloons. Twenty-seven balloons were tangled in the sails or lost at sea attempting to land on the  ship before the last balloon’s burner ignited the ship’s sails.
Antilles wrote in his diary that the unanticipated accident “lit that bastard ship up like a Roman candle.”
After retiring to Coma, where Antilles spent his final years, the former admiral would spend years trying to perfect models of the sailcraft carrier on Lake Coma.
The model that ran over Antilles and sent him to his watery grave is still on display at the Coma Historical Society.