An LOL Girl Mystery: Why So Much Suffrage?

Daddy Warbucks: Why are you wearing that mud mask on your face and cellophane all over your body, Marybell?
Me: Because I am trying to solve the mystery of sufferage.
Daddy Warbucks: I think you mean suffrage?
Me: I mean of suffering.
It’s a mystery why women weren’t allowed to vote. There are so many things we do well when it comes to making decisions. For instance, last night I decided to see “Suffragette” at the Women are Awesome in Movies! (or WAAM!) film festival at the Coma Laundry and RollerRink. I knew it would be amazing because it was sponsored by some film student guys from NYU .
As I walked in, the organizers were turning some women away at the door. It looked like there was plenty of room but the guys were super serious that women with children or “appearance issues” just don’t understand art films. They let me and my sorority friends in as long as we left them our numbers for “follow up questions on womanhood.”
Before you ask, no, Suffragette has nothing to do with Smurfette or any other obviously made up creature whose only issue is that she lives with a bunch of blue men who don’t appreciate what they’ve got.
So. wrong.
Suffragette was actually about how horrible woman had it before we had decent clothes, the right to a wide range of facial creams, and the technology to scientifically suck away unwanted fat.Trust me, when I first heard I was going to see an Indie film with some film nerds I thought, “I’m too attractive to sit in a dark room for three hours watching some people with bad teeth and British accents talk about suicide.” But you know what? I learned the film was actually a great detective case about why so much suffrage occurred to get us to where we are today as women. 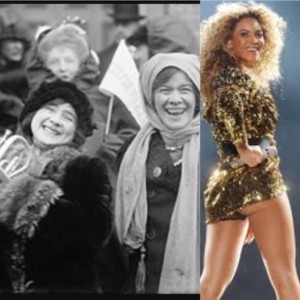 Ladies, we’ve come a long way. Not only can we vote for elections and make the same political mistakes as men but we also have been freed from the horrible look chicks were rocking in the 1800s. Nothing says feminism today like Spanx, hairspray and eyebrow threading.

And let’s not forget the men who’ve helped us get here. It’s not just the Hollywood people, like those NYU guys, but also the technology of Silicon Valley, which allows me to devote at least an hour each day taking the perfect selfie. I also have technology and our entertainment gurus to thank for bringing me my personal role model: Beyoncé. When I saw her on that Comcast commercial where she was writhing around on the floor with a giant gold “bling” necklace stuck in her mouth I knew, I too, was special as a woman. When I saw Lady Gaga wearing raw meat and getting spanked by all those dancing guys I knew that, I too, was smart enough to take on any challenge.

We’ve come so far from the sad, sad days of Suffrage that instead of wearing gross black dresses, women can do anything that requires nudity or lots of cleavage. And that’s serious.

The mystery of suffrage is pretty simple: Those women suffered and worked hard so that I can find the perfect angle for my bikini selfie. Because it’s not just about my body. It’s about my mind.

Daddy Warbucks: Marybell, there’s a guy on the phone from NYU film school who wants to talk to you about what you thought about the film Suffragette over dinner tonight.
Me: Not now, Daddy. After I finish tweeting my sexy selfies I have to finish my juice fast. I’ve done enough today by solving the the mystery of suffrage suffering.