This advertorial does not reflect the views of Coma News Daily 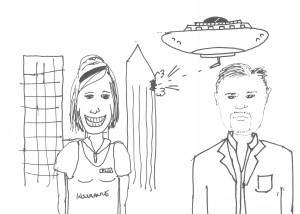 THIS IS THE MOVIE HOLLYWOOD DOESN’T WANT YOU TO SEE! Finally, an apocalyptic alien invasion movie without all the clichés! This big-budget summer blockbuster will make billions of dollars.

Aliens have invaded earth and they aren’t happy! Can a washed-up private investigator (played by Leonardo Dicaprio), and a down-on-her-luck notary public (played by Flo from the Progressive Insurance TV commercials) save the world before it is too late? Maybe.

Below is a sample of this gut-wrenching, eye-popping disaster epic:

Terror-filled SCREAMS and CRIES FOR HELP ring out across the city as people run and scramble for safety. The scene is complete pandemonium. In the sky, an ALIEN SPACESHIP hovers above one of the many skyscrapers.

LEONARDO DICAPRIO, a washed-up private investigator, takes cover behind an abandoned car in the middle of a chaotic street. By his side is FLO FROM THE PROGRESSIVE INSURANCE COMMERCIALS ON TELEVISION.

The alien spaceship shoots laser beams at a large building, creating a HUGE EXPLOSION. Concrete, glass and steel rain down on the street below.

Those aliens are blowing up a bunch of stuff!

What do you think they want?

Why do you think they want money?

They are probably holding us ransom until we pay them a bunch of money. Like A LOT.

But what good would our money be to them? I mean…like, what would they spend it on?

The alien spaceship fires another laser beam and destroys a second building. Leonardo and Flo cover their heads as debris from the explosion flies all around them.

I don’t know. Yachts, a nice watch, fancy galas. Same thing all the rich people spend their money on.

What are we going to do?

Leonardo Dicaprio reaches for a chunk of concrete.

We’re going to fight back!

Leonardo Dicaprio stands up and hurls the chunk of concrete as hard as he can at the alien spaceship, hitting it squarely. The spaceship wobbles in the air for a moment, seemingly losing all ability to navigate, before crashing into a large building and exploding.

That’s all for now! If you want to buy this screenplay, get in touch with me immediately.  For a limited time, I’m offering this and “Death Cow” as a package for $650,000! You can’t beat that deal! Don’t wait!