Scientists in Coma announced this week that while their research is not yet complete, early results suggest numbers go on for even longer than they initially believed.

“We’re all a little shocked by what the data is suggesting,” Dr. Jimmy, who heads up the research team, said. “In theory, it would appear that number can just keep going for a really, really, really long time. But it’s still early.”

The research project began last month and is being funded, in part, by the Coma Futurist Society in an effort to better understand numbers and their limitations.

Researchers have been working in shifts and logging numbers into a spreadsheet in sequential order starting at the number one.

“It’s been a very trying research project,” Micah Horncraft said.  Horncraft, who heads the Futurist Society, has been volunteering on the project for the past two weeks. “It’s a lot of typing. My fingers got sore. But there’s just so many numbers.  You got one, two, three, four, five…and a bunch more.” 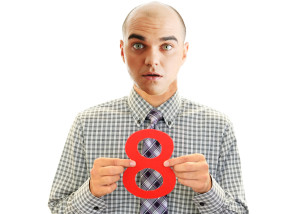 Micah Horncraft holds one of the many numbers scientists have been counting since January. “There’s lots of them,” Horncraft told reporters this week.

According to Dr. Jimmy, based on preliminary results, it is theoretically possible that number just continue without ever stopping.  Dr. Jimmy said such a discovery could revolutionize math and probably some other things as well.

“So far, we’ve counted up to nearly eight thousand,” Dr. Jimmy said. “It seems like we can just keep going and going.  But we’ll see.  Maybe there will be a surprise along the way and everything will just stop suddenly.”

Dr. Jimmy said the project was initially scheduled to wrap up in early March but may extend into April, depending on when they discover “the end of numbers.” Horncraft told reporters a special event will take place at the Futurist Society to announce the results of the research project.