Local businessmen thought a free range alligator farm/petting zoo would be a fun new attraction for our town.

Tell that to the street cyclists.

Fifteen adult cyclists were injured Thursday when some of gators escaped from the recently opened gator farm adjacent to Coma’s assisted living facility for recently divorced men, A Home for Those Guys.

The escape of at least 10 gators from A Home for Those Gators was not discovered until some of the cold blooded behemoths laid out to sun bath on adjacent streets and were struck by some of the swarms of street bicyclists that regularly descend on our town.

“I think they thought the gators were speed humps because they would slow down and try to ride over them slowly,” said Chase Donovan, a local teenager and witness.

When the gators were run over They would thrash around and knock the riders off their bikes.

“It was kind of awesome,” Donovan said. 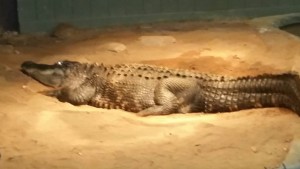 Once on the ground the Lycra-clad  cyclists suffered numerous bites, claw stratches and lacerations from tails. Unfortunately, no nearby bodies of water were available for the predators to drag and drown the cyclists.

“Gators?! What’s wrong with you people in this town?” Lieberman.

Not to worry, according to Jax Owen, who manages the gator farm. The most violent gators among the recaptured reptiles would be prioritized for the farm’s first belt and gatorburger culling.

“Everyone knows a mean gator is a delicious gator,” Owen said.