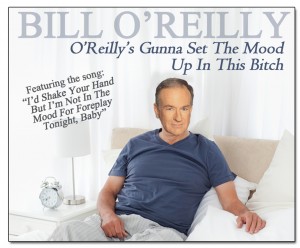 Although not known for his songwriting and singing skills, popular television host Bill O’Reilly created a bit of a stir in January 2013 with the release of his first full-length studio album titled “O’Reilly’s Gunna Set The Mood Up In This Bitch”. Recorded entirely over the course of a three-day weekend in the town of Coma, the album was intended to usher in a new age of seduction-style music. While initial sales of the album were promising, many critics and consumers had negative, even traumatic, reaction to O’Reilly’s attempt at singing and songwriting.

As Rolling Stone music critic Richard Hughes put it; “There are things in this world that, once heard, cannot be unheard.  Unfortunately, that is the case with ‘O’Reilly’s Gunna Set The Mood Up In This Bitch.’”

Hughes was not alone in criticizing the album.  Researchers at Long Beach State University in California conducted a six-month study on the effects the album had on couples who listened to it before initiating intimate contact.

“It’s quite disastrous,” lead research Dr. Paul Higgins said of the study.  “Not only does the record fail to incite even the most microscopic levels of sensuality, in many cases it has turned off listeners to the idea of having sex for months.” 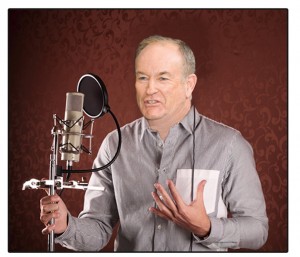 Wilton Foster and his wife Eunora participated in the study and fall into that latter category of listeners.

“We haven’t knocked boots in almost nine months,” a dejected Foster said.  “Usually I’d be frustrated about that and maybe even mad at my wife, but I’m just as much to blame.  After listening to that album…well…it changed me.”

With 12 tracks on the album, including songs titled “Let’s Touch Our Private Parts Against Each Other,” “Man On A Mission(ary) Position,” “Imma Dress Up Like Henry Kissinger And Rock Your World” and “I’d Shake Your Hand But I’m Not In The Mood For Foreplay Tonight Baby,” the record was intended to help set the mood for millions of couples across the country.

“This entire project is a natural progression for Mr. O’Reilly,” O’Reilly spokesman Jeffery Bayer said.  “Mr. O’Reilly already appears in millions of living rooms every weeknight.  It only made sense that he transition into millions of bedrooms as well.”

For the Fosters, and thousands of couples across the country, only time will help heal the scars that were left after listening to the album. 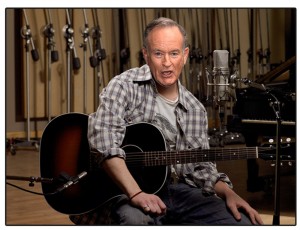 A sampling of some of the lyrics from the album, in the very least, will make the listener confused and maybe even disoriented for some time.  Below is an excerpt from O’Reilly’s “Lady, You’re Going To Get Love Making From An American Patriot Who Is Also A Virgin”:

“Our private parts are private/we keep them in our pants

While many retailers have removed the album from their stores, including a number of online retailers, the album is still available at Wal-Marts across the country.