As rare as it is to see a “bigfoot” or “sasquatch” in the wild, coming across one in the business world is even more unlikely and can be just as startling.  Just ask Senior Vice President of Sales at Coma United Financial Services, Mark Taylor, who claims he encountered a bigfoot at a shareholders meeting in January.

“The meeting started off pretty routine,” Taylor said.  “Then we got to the part about quarterly dividends and in walks this giant, hairy son-of-a-bitch.  I couldn’t believe what I was seeing.  He approached the front of the room and went into a rather long lecture on how dividends were down and that it might be time to consider a new strategy. At least I thought that’s what he was saying.”

Taylor was not the only witness to the incredible event.  Several shareholders who had managed to stay awake until that point in the meeting corroborate Taylor’s story.

“He talked for about 40 minutes and then fielded some questions from the shareholders,” said Gene Page, an executive assistant who was there to take minutes.  “He mostly answered with a series of grunts and growls so you kind of had to piece it together, but for the most part he didn’t shy away from any of the tough questions.” 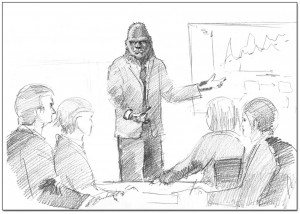 According to local Cryptozoology expert, Micah Horncraft, such encounters are incredibly rare, but add credibility to decades of accounts regarding what are known as “Corporate Bigfoots”.

“These are serious, well-dressed anthropologic creatures with a keen business sense,” Horncraft said of Corporate Bigfoot.  “Most of their business knowledge is based on an economy that trades sticks, leaves and animal droppings, but many of their principles are sound nonetheless.”

Added Taylor, “If I’m being completely honest, I had no fucking clue what he was talking about. But that could be said about any of these meetings. Don’t print that part.”