May. 25 News no comments 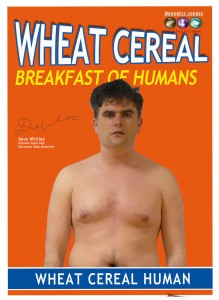 Sometimes marketing and branding forgets the common person. But an agri-food conglomerate is looking to change that with the help of a Coma resident.

Hillsbrand Food Company is trial testing a new cereal, Wheat, in the town of Coma to as an alternative to the popular Wheaties breakfast cereal.

“We did a lot of research and found that most Americans, or even humans for that matter, were not actually champions of anything,” said Charles Hogan, vice president of marketing at Hillsbrand Food Company. “To us, Wheaties was targeting maybe the top one-half of one percent of the market. That leaves a huge portion of the market for a competitor.”

Hogan estimated the potential market for Wheat is “whatever one-half of one percent subtracted from one-hundred percent is.”

Using the tag line “Breakfast of Humans,” Wheat is similar to Wheaties and features people on the front of the cereal box. Unlike Wheaties, Wheat cereal features average humans and a handful of D-list celebrities. And at least one Coma resident.

The first box featured Mike Chandler, a 34-year auto salesman recently fired from JAX Used Cars. Chandler, who had DUI convictions in 2002 and 2005, is in the midst of his second divorce and recently filed for bankruptcy.

“I feel I’m good enough to eat their cereal,” Chandler said “ What are my qualifications for being on a cereal box? Well I’m a living human being and they told me the living part is the only qualifier when it comes to eating their cereal.”

Sales for the cereal have languished since the product hit shelves in Coma nearly three months ago, but Chandler is not discouraged.