On This Day in History…
Mailbox ‘Hat’ Invented in Coma 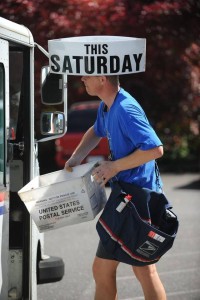 A mailman during the recent Funny Hat Day to honor the historic Coma Hardt Hat, which aimed to deter mailbox baseball.

Robert Hardt grew sick and tired of picking up the remains of his mailbox after local mailbox baseball players kept knocking it loose.

First came a treated 4×4 post, but it was snapped. He moved up to a 6 inch fencepost, and they got it too–although it cost them the front bumper of their truck.

Next came Hardt’s “stunt” mailbox, which placed several fake mailboxes in a row so the lead box got hit. However, on some “heavy rotation” nights batters would work their way through all five stunt boxes until they were able to destroy his actual box.

In his diary, Hardt recalled that he ran out of mailbox money for a while so he took to camping out near his mailbox and reporting the license plate numbers of smashers to the Coma Sheriff.

“Fat Bastard wouldn’t do a thing,” Hardt wrote. “And I think some of the box-smashers are off-duty deputies.”

Undeterred, Hardt moved on to a very large mailbox, with a smaller one inside it, and filled the cavity
between the two with concrete.

“They got that one with a snow plow mounted on the front of a truck,” Hardt wrote in his diary.

The first “Hardt Hat” mailbox was a regular mailbox mounted on a spring pole. The next couple of times
they smashed it, Hardy just hammered it back out.

“I thought they might get tired if they found I wasn’t bothering to replace the mailbox,” Hardt wrote. “That
stopped em for a while; then they realized that the spring post was in two bolted-together sections. So they stole the top section and mailbox.”

His second Hardt Hat mailbox finally did the trick. It was simply a heavy duty quarter-inch steel box welded to a 4-foot long heavy coil spring set in a 7-foot deep concrete base.

“The solution was so simple and staring me in the face all along,” Hardt wrote to himself.

Even decades later, Hardt Hat mailboxes continue to dot Coma and their recoil continues to provide satisfying dents in drive-by vehicles across town.