Expressing a desire to capture the “essence” of America’s greatest moments in sports, local artist Dee Collins unveiled her latest series of sports paintings this week. The collection, titled “Believe in the Unbelievable”, represents Collins’ third installment in the series.

“There are unforgettable moments in sports,” Collins said. “We remember exactly where we were when these events happened. I wanted to capture those moments for an eternity.” 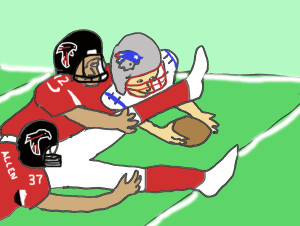 The latest series consists of three paintings, including one titled “The Catch Everyone Keeps Talking About” featuring New England Patriots’ wide receiver Julian Edelman making what some called one of the greatest catches in Super Bowl history just last weekend.

Collins will have the paintings on display at her studio in Coma and reminded reporters that her work is for sale. Although she wouldn’t give specific details regarding cost, Collins said, she won’t consider anything less than five figures.

“You will not find paintings like these anywhere else in the world,” Collins said. “Literally. By definition a painting is unique. I’m willing to consider a discount if you bundle your purchase.” 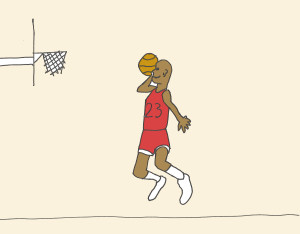 The latest series also includes a painting of NBA legend Michael Jordan performing his signature slam dunk during the 1988 dunk contest and a painting of the most decorated athlete in Olympic history, Michael Phelps, competing at the 2012 Olympic games.

Collins, a prolific author, screenwriter and artist, said she has a passion for sports and that her work represents moments she remembered or learned about when doing an online search for “memorable sports moments.”

“I am a sports fan, for sure,” Collins said. “I like the New York Patriots and basketball teams and…golf balling is fun too.”

Collins said she expects this series of paintings to sell quickly, mostly because of the timing and the fact that so many people are still talking about the historic comeback and finish at last weekend’s Super Bowl in Houston. 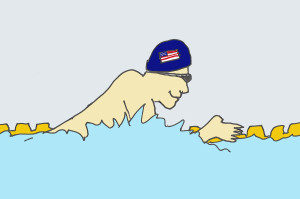 ABOVE: Collins’ “Swimmer In the Pool” captures one of Michael Phelps most famous swims during the 2012 Summer Olympics

“Do you have fifteen thousand dollars and want to remember the incredible catch by Julius Edelen?” Collins posted on her website this week. “Then come down to Dee Collins studio and buy an original painting by Dee Collins.”

Collins said the paintings will remain on display until the end of the month or until they are sold out.