The first weekend of action in the popular NCAA college basketball tournament wrapped up with plenty of exciting finishes and big upsets.

As you consider filling out your bracket for this year’s tournament and a chance at $1 billion dollars (what?!), here are some tips for winning first rounds.

2. Dayton is a tough match-up for Ohio State.  Ohio State has struggled scoring at times this season and Dayton has an explosive offense that led them to a win against the heavily-favored Buckeyes last week.  Do yourself a favor and pencil in Dayton here because they actually beat Ohio State in a game that was already played.

4. I really like Mercer to beat Duke and then get hammered by Tennessee.  Duke may overlook this little-known 14 seed, which could spell trouble for the Blue Devils.  I say go with Mercer in this shocking upset that actually already happened.  But don’t get too high on Mercer.  I have a feeling they will meet Tennessee in the next round and will get steamrolled.  This prediction was even more salient yesterday when Tennessee absolutely annihilated Mercer to advance to the Sweet 16.

5. I am a big fan of Stanford.  While Stanford didn’t make a lot of noise during the regular season, I like their chances of rolling into the Sweet 16.  Why risk a perfect bracket with this tip?  Because Stanford actually won two games over the weekend and qualified for the Sweet 16.

Still not ready to buy into my advice?  Well, check out a sample of my bracket below.  You’ll notice it is still perfect: 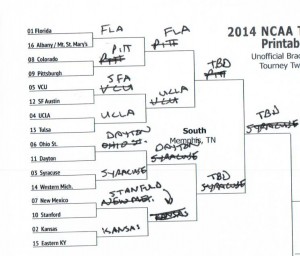