A Coma resident made history this week  when her social media post became they first in history to change someone’s vote.

When told of her historic achievement, Dee Collins, was surprised that all of her previous 322 political posts had not had the same effect.

So what’s her secret?

Collins said she carefully crafts her Facebook posts while keeping in mind they need to appeal to both the heart and mind of persuadable voters.

“These days, that usually means explaining that the candidate I oppose is going to burn down their house and imprison their family,” Collins said. “Civility. I keep the conversation civil.”

Her success has not come without a cost. Collins has had to replace several laptops and ipads in recent weeks after using a hammer to type in some of her political posts.

“They just don’t build these computers to last,” Collins said.

Despite the personal cost, Collins was thankful that social media allowed politically minded people like her to personalize their election appeals to their friends, family and acquaintances.

“It means a lot to me to be able tell these people that if they’re going to support that rat for office then I’m going to have to find them and do some bodily harm to them–it’s only fair,” she said. 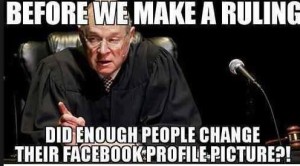 The beneficiary of Collins political activism was Chase Donovan, a local Coma teen who will be eligible to vote for the first time in the upcoming election.

“I was hoping that if I just agreed to whatever she wanted then she’d stop filling up my Facebook feed with all those posts about politics and rape or purges or whatever she’s talking about,” Donovan said. “I’m probably not going to vote anyway–but don’t tell her that.”

When told by a reporter that Donovan was unlikely to vote, Collins repeatedly and unsuccessfully demanded his home address so she, ” can set his house on fire.”

Joe Fingersniffer, a spokesman for Facebook, confirmed that Collins’ historic achievement came after approximately 900 billion politically related posts by others on Facebook.

“This really gives hope to the tens of millions of other shut-ins and unmedicated depressives who use our service to threaten their friends, families and acquaintances over politics,” Fingersniffer said.