Editors’ note: The following is an advertorial and does not necessarily reflect the views of Coma News.

With football dominating headlines nationwide recently, a lot of people are wondering how it’s possible for them to enjoy the sport any more than they already do.
One fan thinks he has the answer. And it’s delicious.
“A lot of people ask me, ‘Jax, what else could we stuff in a pizza?'” said Jax Owen, who recently bought Bo’s Pizza House in Coma. “I’ve heard all about cheese and bacob stuffed pizza but I wanted something bigger.”

Most people think stuffing a chili dog (spelled incorrectly in this ad because there’s so much chili it needs two ls) in a pizza doesn’t go far enough.

Owen soon realized the only way to outdo Big Pizza was to stuff football gear in the crust.
What’s that you say? You are watching football and need a jockstrap? It’s in the crust. Did I hear you need some gym socks? No worries, it’s in the crust.
“If you can imagine something pre-worn and needed to play football I’ve probably put it in the crust of one of these pizzas,” said Owen, who gets his pizza ingrediants donated by local youth teams.
Football may have been the best choice for a pizza theme but Owen admitted it wasn’t his first idea. It followed separate failed efforts to infuse pizzas with Viagra and truck parts.
“There were all sorts of FDA regulations involved and, anyway, who really wants to touch a slob who can consume three or four of these pizzas in a sitting?” Owen said his no-longer-available erect-dial pizza.
Bo’s Pizza House delivers seven days a week from 6pm to 5 am. 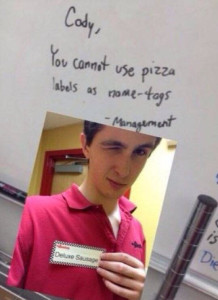