Amid the quiet of a Coma summer, one local woman is calmly smashing glass ceilings–with a 25,000 lb. garbage truck.

The most shocking thing about driving with Sadie Cracker isn’t surviving the g-forces as she rockets her monster garbage truck through Coma neighborhoods. Or going weightless as she pilots the behemoth truck across one of town’s many river jumps.

The thing that makes your mouth drop are the 1940s attitudes she slams into after the truck slams back onto the ground.

“I’ve had girls tell me they didn’t even know women could drive a garbage truck or be a garbage collector,” said Cracker, who recently made history as the first female waste management engineer in Coma.

Sure enough, every little girl we stopped and spoke to on a recent morning as Cracker drove past said they thought only “gross men” were garbage collectors.

“You mean, I could be a garbage collector when I grow up?” asked one girl. “That sounds awful.” 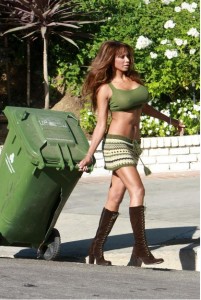 That’s the magic right there.

Cracker’s career accomplishments did not sit well with all Coma residents. Natalie Peters, the only female member of the Coma Town Council, raised concerns.

“It’s unfortunate that a woman is reduced to hauling garbage in this town because positions that would reflect our inherent self-worth, like modeling, gameshow letter turners or being a Kardashian are unavailable in this one-horse nightmare,” Peters said.

“I hope you mention that this job has a lot if upsides,” said McGuiness, who owns the garbage company and is hiring. “How many office jobs let you fart all day long without a worry?”