The popularity of yoga pants has led to near-saturation of the potential market for yoga among women. But yoga’s male appeal has generally been limited to a handful of coastal cities and flambuoyant neighborhoods.

But CYA organizers will exponentially expand yoga’s appeal by making it a competitive spectator sport.

“There’s a massive untapped yoga market out there: spectators,” said Jax Owen, who will launch CYA along with other residents of A Home for Those Guys, Coma’s assisted living facility for recently divorced men.

“We just knew there was a way to combine the amazing flexibility of yoga athletes with the guttural grunts of competitive tennis,” Owen said. 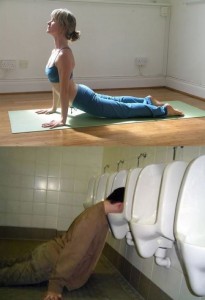 The assisted living facility will be home to one of eight CYA “fields” around which outdoor bars will be aranged. Although the specific competitive rules and scoring system have yet to be worked out, Owen was confident that he has figured out the most important component to make the new sport succeed.

“Pro sports are losing fans all over this country but here at CYA our only concern is making sure we don’t run out of bar stools or kegs,” Owen said. “Men love competition.”

Among known details are that games will last the length of happy hour, will include extensive stretching and will not be called on account of rain. All uniforms will be mostly white “to minimize heat exposure,” Owen said.