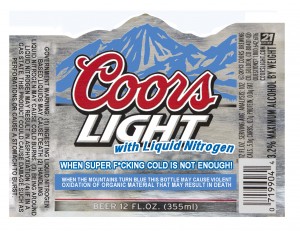 The Coors Brewing Company announced today it will run a pilot program for its new Coors Light-Liquid Nitrogen product in the town of Coma.

“We are really excited about this,” Coma Mayor, Dave Anderson said.  “It’s not often we get hand-picked for special pilot programs with such significant national implications and stuff.”

“We are redefining the word cold with this effort,” Hoffman said.  “We’ve always pitched our product as being as cold as the Rocky Mountains.  But we realized the Rocky Mountains aren’t the coldest thing known to mankind.  We had to benchmark against something colder.  We think we found that with liquid nitrogen.”

Hoffman said the pilot program will run for six weeks and the product will be offered at all existing Coors Light retailers in Coma.  The company will also conduct market research in the community, including focus groups, to evaluate performance and further develop their plans for a nationwide launch in June of 2014.

The new Coors Light-Liquid Nitrogen is a cryogenic fluid infused with the popular beer.  It can cause rapid freezing on contact with living tissue so the company has gone through the process of re-labeling its bottles and packaging so consumers understand the risks involved with handling the product.  At this time, there is no scientifically safe method for ingesting the beer, but Hoffman is undeterred by such detail.

“We’ve really moved beyond caring about whether or not people can drink our beer,” Hoffman said.  “That went out the window a long time ago.  Now, we only care about the science and the processes involved with producing the coldest beer known in our galaxy and perhaps all the universe.  That’s all that matters now.”

According to Hoffman, consumers should take precautions when opening a bottle of Coors Light-Liquid Nitrogen due to the fact that as the liquid evaporates, it may reduce the oxygen in the air and may act as an asphyxiant, especially in confined spaces.

“I wouldn’t try to drink it in a broom closet, if you know what I mean,” Hoffman said.  “That shit will knock you right on your ass.” 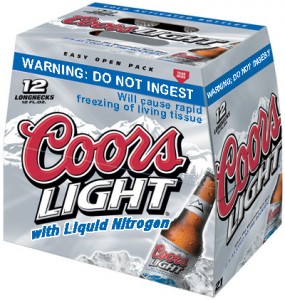 The new Coors Light-Liquid Nitrogen will be available at Coma retailers starting next month.  Mayor Anderson said it was a good opportunity for the town, but he had some reservations about the product itself.

“Apparently the people at Coors use mountain water to brew their beer,” Anderson said.   “I’ve always thought that was odd because I’m sure there lots of rodents and mice and raccoons and elk and moose that urinate and defecate in that water.” 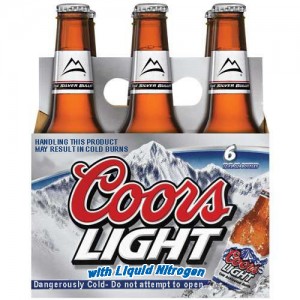