Healing Hearts One Ball at a Time

When local resident and Coma basketball celebrity Micah Horncraft launched a basketball camp this summer for aspiring superstar students the unexpected happened: Hearts were healed.
Horncraft launched the camp, Dream Team, less than a year after he went unselected in the 2013 NBA draft.
“I knew it was no sure thing since I had never played team basketball but it was still devastating,” Horncraft said about his NBA experience.
But failing to garner interest from a single NBA team was still enough to propel Horncraft into the ranks of local celebrity, which attracted a capacity inaugural class to his basketball camp for local teens and young adults.
“It’s kind of cool because, you know, he was almost in the NBA, or whatever,” said Chase Donovan, a camp enrollee.
“His drills are really different.”
Horncraft’s camp also has drawn attention for its enrollees’ participation in various activities that appear unrelated to basketball, such as helping him curate his museum.
“It’s amazing that even cut-rate local celebrity turns people into drooling zombies,” said Robert McGuiness, the only middle-aged camp enrollee.
It remains to be seen if any Dream Team graduates will go on to fame and fortune but Horncraft already considers the camp a success.
“Helping kids and that older gentleman has really allowed me to heal from my heartbreaking experience with the NBA,” Horncraft said. 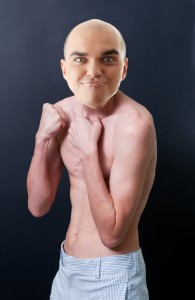 Horncraft, above, said he  is considering next launching an all-star ultimate fighting academy.

Horncraft, who was not invited to participate in any pre-draft workouts or camps, said a lot of getting drafted has more to do with “who you know” and indicated he would work harder over the next year to develop contacts “in the right circles.”