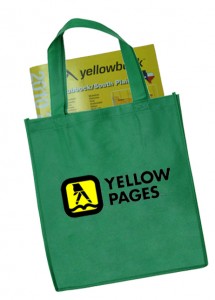 The tote bag program was created in 2009 as the phone book company sought ways to remain relevant in a digital age. As profits plummeted from one year to the next, Whitener developed the idea that he thought would propel the phone book into the 21st century.

“The new-look phone book had to be portable, that was rule number one,” Whitener said.  “We spent months trying to think of ways to make the book smaller or lighter or more portable.  And then one day, someone walked into a meeting with this lovely tote bag and we all stopped and stared and said, ‘that’s it!’”

The tote bag was complimentary with hopes users would be more likely to carry their phone books with them when they went shopping, out to eat or any public outing.

Despite some early momentum, the portable phone book tote bag fell out of favor with consumers, who cited strain on the neck and back and a general sense of exhaustion caused by carrying around a 24 pound book all over God’s Green Earth.

Based on this feedback, Whitener and his team did a re-design to make the book lighter and the portable phone book tote bag version 2.0 hit the streets in the spring of 2010. 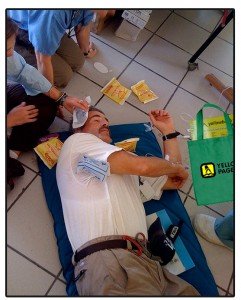 “We went through the phone book and decided to remove a lot of the listings that nobody gave a shit about any more,” Whitener said.  “We removed any listing having to do with museums, libraries, really anything cultural value was removed.  That dropped the weight by about six pounds.”

To complicate matters, following the launch of version 2.0, several deaths were linked to heart failure and stroke due to excessive strain caused by the phone book tote.  Several lawsuits followed and the product was scrapped entirely. 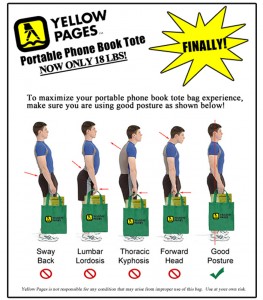 “A lot of people were bitching about neck and back pain and some people required surgery to repair minor spinal damage.” Whitener said with a hint of disgust. “We put a fucking chart up on how people should stand and walk and shit to reduce their risk of serious injury.  It’s not my fault they can’t read or understand a basic picture!”

While a number of lawsuits were settled out of court, the company is still facing pending litigation.  Company officials said the tote bags would no longer be available starting today.