Inspired by the recent soccer match between the United States and Portugal, which resulted in a draw for the Americans, Coma artist and writer, Dee Collins, announced this week she will release a series of collectible illustrations to commemorate the 2014 World Cup.

Entitled “Soccer In A Series of Hand-Drawn Illustrations: Snapshots of the Greatest Moments of the World Cup Soccer Tournament in Brazil in 2014 by Dee Collins,“ the first piece in the collection will be released today and features American Clint Dempsey celebrating a goal in the match versus Portugal. 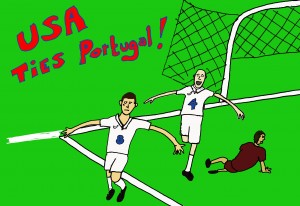 Collins captured the magic from the United States’ recent match against Portugal in this stunning illustration. The series will be available to purchase later this week.

“Photographs fail to capture the essence of the moment,” Collins said.  “An artist’s brush can immortalize a moment like no other medium.”

Collins said prints would be available in full-color 8.5″ x 11″ copies or black and white copies for a reduced price.  While she has not yet set a price for the work, Collins said she hoped to keep it affordable.

“I can’t see these pieces selling for more than eighty or ninety dollars each,” Collins said.  “We’ll see where the demand is on the pre-orders and go from there.  My hope is children young and old will be able to afford one or two in the series and cherish them for a lifetime.”

Collins said that while she is not necessarily a soccer fan, she has watched several highlights of this year’s World Cup and saw photos on popular news websites like CNN and Yahoo.  Additional illustrations in the series will be unveiled weekly until the tournament wraps up in July.