Coma resident Alfonso “Cinnamon Boots” Dabney passed away peacefully in his sleep this week at the age of 106 in what many are calling a tragic death of the town’s oldest citizen.

“He was just starting to live,” Dabney’s doctor, Dr. Jimmy said.  “One minute you’re a vibrant, bed-ridden 106-year old man and the next minute, you’re dead.”

Mourners, many of whom were inconsolable, stood outside Dabney’s nursing home in an impromptu memorial.  Many wept openly and tried to make sense of what some are calling a “senseless” death.

“How does this happen here?” Coma resident Dee Collins said. “It’s the kind of stuff you see on the news or a ripped-from-the-headlines movie of the week.  It’s surreal.” 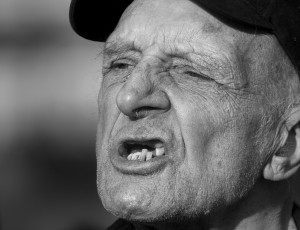 ABOVE: Photo of Dabney from 1984 during a rally he organized to ban dancing in an effort he hoped would prevent the town from turning into one of those “Footloose communes.” Dabney also sought to “send those immigrants back to China or England on a boat.”

Dabney, who earned his nickname “Cinnamon Boots” during prohibition where he served as a cinnamon runner for local moonshiners, was remembered by mourners as a curt, almost helpless curmudgeon who incessantly complained about the sodium levels of his soup and the “damn foreign nurses” who were trying to kill him.

After serving heroically as a warehouse supply clerk in San Antonio during World War II, “Cinnamon Boots” returned home to Coma after the war and was mostly forgotten about until his 100th birthday party celebration in 2009.

Many who gathered at the makeshift memorial reflected on Dabney’s life and the very nature of life and death itself.

“Makes you think that none of us are immune to things like death,” Jax Owen, one of the many mourners, said. “I’m just trying to make sense of it all. There are a lot more questions than answers right now.”

Mayor Dave Anderson released a statement yesterday afternoon urging the town to “persevere through such tragedy” as “all great communities do.”

“The great crisis of our time is now before us,” Anderson’s statement read.  “While we have been reduced to ashes emotionally as we struggle to understand how a relatively unhealthy, decrepit 106-year-old man suddenly passes away, I am confident in our ability to rebuild our community, survive this tragedy and become a better version of our former selves.”

Dabney has no known living relatives.  A formal memorial service is being planned and the town will be offering counseling services for citizens who may need support to deal with the tragedy.