May. 13 News no comments

A month into the season and still with no wins, the Coma Middle School Wolverines baseball players faced a tough decision.

“We had two choices: Finish the season possibly winless, or make the second half a completely different story,” said Coach Jax Owen.

The black and blue decided on the former. 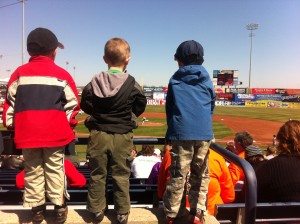 Pitcher Ethan Davis’ 20-hit performance April 17 at home against Barnesville was definitely not what the doctor ordered. The 15-0 shutout loss, Owen said, pretty much cemented the attitude of the team. Not only did it finally put double digits in the loss column, it also served as a springboard to the rest of the ‘Rines’ losing season.

Since an 0-9 start, the Wolverines have won none of their last eight, playing more and more like the team the players and coaches have come to expect.

“The majority of those first nine games came down to us beating ourselves (rather) than teams flat-out beating us,” said team mom Sadie Cracker. “But since then the teams have gotten a lot better so now it’s definitely them beating us.”

Cracker added that some of the early-season struggles probably were due to Owen being a new coach and implementing a new system.

Owens agreed that the players didn’t have a lot of faith in his system of playing more small ball and manufacturing runs with team speed and simple execution.

Meanwhile, simple changes in approach by the players did nothing to improve results, Owens said.

“I kept thinking it would get to a point where players started buying into the team,” Owen’s said. “No dice.”

The only surprise to him was the hopeless record eventually translated into a more relaxed and enjoyable brand of baseball.

“We knew coming into the season there was some high expectations because people assumed we were capable of so much more,” said Davis. “But once reality set in, we started to relax and the entire atmosphere changed. I laughed a lot in those last games.”

A shell-shocked Owen said he has drawn a lot of support from assistant coach Robert McGuiness. McGuiness, a fomer Scottish National Football (soccer) League player has never coached baseball but was well versed in the art of losing.

“Without knowing all of the various rules of this strange sport it was not always clear exactly how we were losing but I’m told that teams made some great plays against us and started to create their own breaks,” McGuiness said.

Owen said the team hopes to rebuild and develop sky-high expectations by the start of next season.

“I think we have the talent level to make a run, a deep run, I really do,” Owen said. “I have no idea why I think that, but I do.”