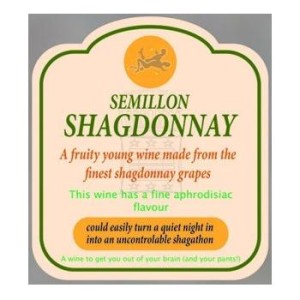 The Semillion Shagdonnay was a 2011 winner created by Jax Owen owner of Jax Used Cars and Jax Organic Bikes. The popular local vintage was retired when the local Grape Hut closed its doors.

“The gold medalists from this year’s Governor’s Funnel were selected from 505 entries of both red and white wines, from 57 wineries,” according to the state’s alcohol tourism marketing office.

2014 was a historic showing for Coma in the Governor’s Funnel Competition, with four local wines appearing in the case.

Correction: This story has been updated to remove any reference to the crass retail versions of these vintages, which are on bulk sale this week at both Coma beer and wine sellers.

← Coma Weekly FREECYCLE Digest
Where Do the Missing Go? →