The Town of Coma will be struck by unexpected financial windfalls, fire and demons this weekend, Coma News has learned in a fever-filled-peyote dream.

The money will come from several sources, including malfunctioning ATMs, a wave of miscalculated IRS refunds, and the opening of Coma’s first payday loan store.

“That’s really good to hear,” Mayor Dave Anderson said about the impending financial boondoggles. “As long as its not an insurance payout from some kid dying, which is how these free money things usually play out.”

The most sensational source of cash will come from a mid-air heist of a Treasury Department flight gone awry 30,000 feet over Coma. Unfortunately, the giant bags of high-denomination bills that land throughout Coma will be quickly recovered after door-to-door searches and body probes by federal agents. 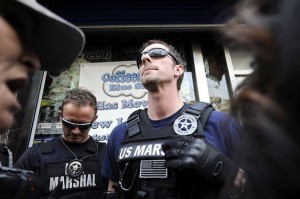 The agents pictured are not the actual agents who might descend on Coma but are a good example of what was seen in the reporters fever dream.

“The technology the Feds got these days, it’s probably just a good idea to go ahead and give them the cash back right away,” Councilman Bob Smith-Smith said about the impending searches and probes with information he learned from Wikipedia.

Additionally, there is a good chance that on Saturday night some portion of Coma will be consumed by fire and demons.

This is an artistic rendering of a fire and demon descent on the Town of Coma.